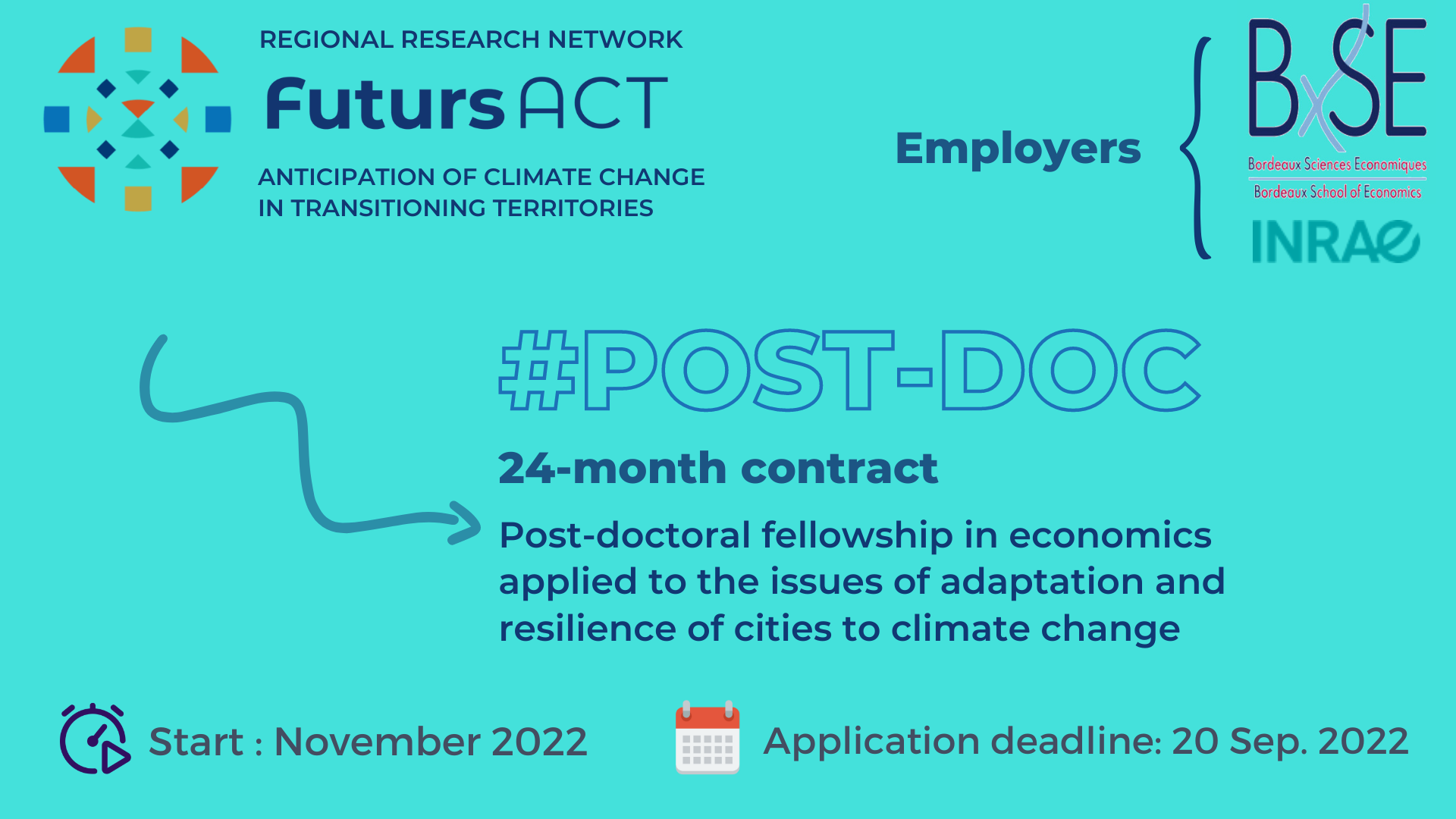 You will be hosted in two different organizations that collaborate in the context of a European research project. The first year, you will be hosted in the BSE (Bordeaux School of Economics) laboratory of the University of Bordeaux. BSE is the most important research center in economics in the New Aquitaine Region :  it is composed of approximately 150 researchers, professors, engineers and PhD students. The Program 3 « Development, Cities and Inequalities » includes a team specialized in spatial and urban economics, which works in particular on environmental transitions and its spatial dimension. For the second year of the contract, you will be hosted in the ETTIS research unit “Environment, Territories in transition, Infrastructures and Societies” of the INRAE Nouvelle-Aquitaine (Cestas Gazinet site). This team is composed of about 35 main researchers in social sciences (economy, sociology, geography, politics), agronomy and statistics ; it deals with the analysis of socio-economic transformations of territories tackling environmental challenges and global changes.

You will join the research team of the CREST project « Climate resilient coastal urban infrastructures through digital twinning » (European grant, ERA-Net Urban Transformation Capacities, 2022-2025). Climate change largely impacts urban life. Rising temperatures rises sea levels and increases extreme weather events as floods, droughts and storms, with costly impacts on cities’ basic services, infrastructure, housing, human livelihoods and health. Cities cause 75% of global CO2 emissions, and so its stakeholders must come forward with out of the box solutions to promote innovation, protect welfare and stimulate urban resilience by limiting negative impacts of climate change. But for a problem to be addressed, it must first be seen and felt. Visualization is a potential way of increasing engagement with climate change and IT developments, such as Artificial Intelligence and Augmented Reality, provide significant advancements that can be transformative in engaging audiences with climate change issues. This is at the basis of AugmentCity plataform developed by OSC as a ground-breaking way to operate digital twins of cities, enabling data and “what-if” scenarios to be analysed, compared, and visualised in an interactive and immersive visualisation tool to be used by policy-makers, researchers, startups and citizens alike. Our proposal will build on AugmentCity and apply it in terms of demonstration and mobilization of stakeholders in 3 European urban areas for resilient adaptation of urban infrastructure to climate change.

Your mission will be to support the Bordeaux team of the CREST project, composed of a researcher and a data scientist in each of the two research units. Your participation will be required in periodic face-to-face and remote meetings. You will also be in charge of the interface between the Bordeaux team and the other international teams of the project (English required). You will also participate in meetings with local partners (Bordeaux Metropole in particular).

More specifically, you will be in charge of:

Education: You have a PhD in economics, specializing in urban economics or environmental economics.

Knowledge: You must have skills and experience in the field of urban economics or the environment. Knowledge of the challenges of adaptation to climate change in cities is appreciated.

Skills: The work is to be carried out within a research team in economics, in the framework of a multidisciplinary European project. The candidate will have to be able to write scientific publications in French and in English. He/she should also be able to work in interdisciplinarity to nourish the bond between our WP and the other WPs of the project. Experience and interest in undertaking advanced statistical work and econometrics is also required. Mapping skills (mastering at least the basic functionalities of QGIS) would be highly appreciated.

On substantive issues regarding the position :

Send a CV, a 2-3 page written document describing your understanding of the subject, and any document (publications or other) that you think will be useful for the evaluators.

This project contributes to and receives the support of the Futurs-ACT research network, financed via the “Regional Research Network Development (R3) Policy” of the Nouvelle-Aquitaine Regional Council.